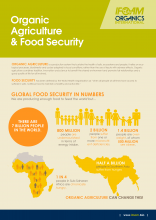 Organic agriculture is a production system that sustains the health of soils, ecosystems and people. It relies on ecological processes, biodiversity and cycles adapted to local conditions, rather than the use of inputs with adverse effects. Organic agriculture combines tradition, innovation and science to benefit the shared environment and promote fair relationships and a good quality of life for all involved.

Food security has been defined by the World Health Organization as "when all people at all times have access to sufficient, safe, nutritious food to maintain a healthy and active life."

Pesticides are the only toxic substances released intentionally into our environment to kill living things. This includes substances that kill weeds (herbicides), insects (insecticides), fungus (fungicides), rodents
(rodenticides), and others.

The use of toxic pesticides to manage pest problems has become a common practice around the world. Pesticides are used almost everywhere - not only in agricultural fields, but also in homes, parks, schools, buildings, forests, and roads, although they have a severe impact on our health as well as on our environment. 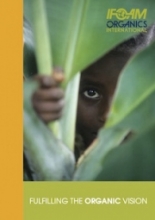 IFOAM - Organics International strengthens the organic movement from the grass roots up. Learn how we showcase the potential of Organic Agriculture to nourish the world, preserve biodiversity and fight climate change - to goverments, international associations and the United Nations. 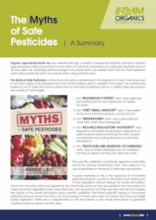 The Myths of Safe Pesticides leaflet

The Myths of Safe Pesticides leaflet outlines the serious deficiencies in the regulation of toxic chemicals used in our food supply. The leaflet summarizes the book by André Leu, President of IFOAM - Organics International, which explains why organic practices are the most viable farming methods for the 21st Century. 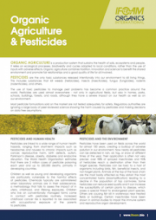 The real solution to our pest and weed problems lies in non-toxic, ecological methods of agriculture, not in pulling the pesticide trigger. In organic systems, farms are managed to maintain and build soil fertility, improving the overall health of microbes, plants and animals as one ecosystem.

Organic 1.0 was started by our numerous pioneers, who observed the problems with the direction that agriculture was taking at the end of the 19th century and the beginning of the 20th century and saw the need for a radical change.

Organic 2.0 started in the 1970s when the writings and agricultural systems developed by our pioneers were codified into standards and then later into legally-mandated regulatory systems.

Organic 3.0 is about bringing organic out of its current niche into the mainstream and positioning organic systems as part of the multiple solutions needed to solve the tremendous challenges faced by our planet and our species. 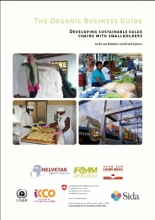 Sales of organic products are steadily increasing, and so is organic production in low and middle income countries. For good reason: for farmers it is an opportunity to increase their income and manage their land in a more sustainable way. Getting the produce from the field to the market requires a certain level of organization, management and finance; a well-functioning organic business. Whether set up in the form of a producer cooperative or a private company, the organic business needs to be efficient, well structured and profitable.

This guide is written for those who are actively engaged in setting up or managing organic businesses with groups of smallholders. It provides practical know-how and essential information for planning, managing and expanding such a business.

Covering topics from designing production and internal control systems to business planning and marketing, it attempts to be a comprehensive reference book for organic entrepreneurs, cooperatives and facilitators. The guide was developed in a participatory process involving people who are active and experienced in managing or supporting organic businesses in Africa, Asia, and Latin America. It draws on a wide range of practical examples and provides links to useful resources available on the internet. 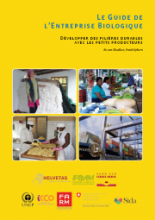 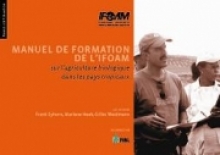 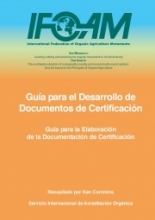 The original concept for this project was simply to compile a dossier of Sample Documents which would serve as templates to be used in new certification programs. However, it was decided not to do this because there are so many variables when setting up a unique Quality Management System documentation. Templates encourage a misguided ‘off the shelf’ mentality which is unlikely to lead to an effective implementation of a Quality Management System. There are many ways to develop policies, procedures and Work Instructions. These may differ not only in content, but also in the format and the language used. Documents should be the thoughts of the people involved in an organization, that have been discussed, agreed and committed to paper. These choices make up the definition and identity of an organization. Nevertheless, some sample documents have been included in the last section of this publication as an indication of how such documents may look. These should be seen as examples only and not as templates.

IFOAM TRAINING MANUAL FOR ORGANIC AGRICULTURE IN THE TROPICS

The Training Manual was developed to improve the quality and the availability of didactic material on organic agriculture in tropical countries. It offers a resource basis for trainers with the idea of encouraging individual adaptation and further development of the material according to the needs. The Training Manual can be used as a guide and source book to implement training programmes. It will help develop the structure of a training course or workshop and provide material and ideas for its organisation. The Manual can also serve as a handbook for those who want to get a more clear and complete idea on the basics of organic farming.

The Training Manual shall be a living document, modified and further developed by those who use it. 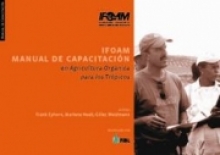 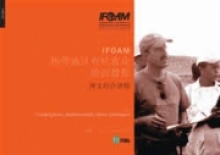 IFOAM TRAINING MANUAL FOR ORGANIC AGRICULTURE IN THE TROPICS CH

The Training Manual was developed to improve the quality and the availability of didactic material on organic agriculture in tropical countries. It offers a resource basis for trainers with the idea of encouraging individual adaptation and further development of the material according to the needs. The Training Manual can be used as a guide and source book to implement training programmes. It will help develop the structure of a training course or workshop and provide material and ideas for its organisation. The Manual can also serve as a handbook for those who want to get a more clear and complete idea on the basics of organic farming. This manual focuses on the arid and semi-arid ecosystems 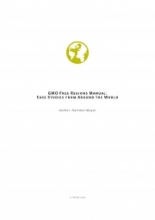 GMO-FREE REGIONS MANUAL: CASE STUDIES FROM AROUND THE WORLD

There is no doubt about the incompatibility of genetically modified organisms (GMOs) with organic agriculture.

In the Mar del Plata conference declaration (1998), the International Federation of Organic Agriculture Movements (IFOAM) articulated a public position regarding GMOs. Consequently, the prohibition of the use of GMOs has been expanded upon in many IFOAM documents, such as the IFOAM Basic Standards.

Recently, the foundational elements of organic agriculture were laid down in the Principles of Organic Agriculture, approved by the 2005 General Assembly in Adelaide, Australia. The principles show that on all levels - Health, Ecology, Fairness and Care - GMOs are incompatible with organic agriculture.

IFOAM is well aware of mostly local and regional but as well national and international activities underway in the anti-GMO movement to set up GMO-free regions. This manual builds on existing expertise by making such experiences publicly available. The manual also provides comprehensive reports from different legal settings, as well as samples of letters and links to useful websites. 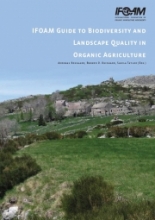 IFOAM GUIDE TO BIODIVERSITY AND LANDSCAPE QUALITY IN ORGANIC AGRICULTURE

The IFOAM Guide to Biodiversity and Landscape Quality in Organic Agriculture is designed to provide practical working examples and suggestions for farmers and advisers who are aiming for real positive change on farmlands world wide. Proven innovations from a wide variety of farms, traditions and agro-ecological zones are described, along with the underlying ecological and agricultural principles that make them effective. The more we all understand of the potential benefits and synergies of enhanced biodiversity and landscape quality within any and all types of agriculture, the more effective and appropriate the solutions that arise in our own contexts will be. This Guide provides a start for that process on which we can build, within the traditions of Organic Agriculture, but applicable for all rural land use.

This second edition has been produced by Gunnar Rundgren with Ong Kung Wai compiling case studies and commenting on the whole work. Further comments and suggestions have been received from Diane Bowen and Eva Mattsson.

The previous edition was edited and written to a large extent by Gunnar Rundgren with contributions from Bo van Elzakker, Jim Riddle, Ong Kung Wai, and Roberto Ugas. It also contains material (in the section in documentation and in part 6) from the Guide to Compiling Documentation for Organic certification bodies, published by IFOAM 2002 and compiled by Ken Commins with input from Krista Kennedy, Vitoon Panyakuul, Jorge Casale, Jochen Neuendorrf, Rochelle Bosche, Robert Simmons, and Virginia Zenteno.

In addition, it contains sample documents developed by Grolink AB. 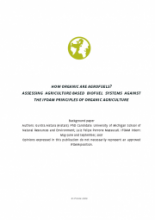 HOW ORGANIC ARE AGROFUELS?

Energy produced from biomass, commonly referred to as bioenergy or biofuel1 , has been actively used and researched for the past few decades. Recently biofuels have gained a new level of political saliency. While in the last two decades most biomass research attention concentrated on solid biomass for electricity production or cogeneration2, recent attention has focused almost exclusively on the production of biomass-based transport fuels, such as ethanol and biodiesel. Crude oil prices have risen considerably, making alternative fuels more competitive than ever before. International concern over climate change is pressuring governments to adopt renewable energy targets; however, these new energy sources may not come without negative consequences to global food production.

In this paper the authors have consciously used the term agrofuels, as opposed to biofuels, for three reasons. First, to avoid confusion with organic agriculture products, because in many languages the prefix “bio” is used to signify organic3, and second, to limit the scope of the paper to address mainly energy systems derived from agricultural crops and crop residues, rather than wood product and forestry-based systems (although many of the same ecological principles can be applied to forest plantations). Finally, while high hopes are placed on the fact that woody and grassy non-food crops can be highly efficient the term agrofuels more accurately reflects the current use of corn, sugarcane, soybeans, and vegetable oils. The term agrofuels more accurately describes the use of food crops for fuel production, and the food security and socio-environmental risks associated with this trend. 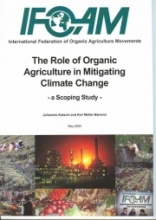 THE ROLE OF ORGANIC AGRICULTURE IN MITIGATING CLIMATE CHANGE

There is dramatic evidence that various Greenhouse Gases are responsible for Global Warming and climate change. This study discusses the potential of Organic Agriculture both to avoid and to sequester Greenhouse Gases (GHG), and makes comparisons with conventional agriculture. The second part describes how Organic Agriculture can be considered within the implementation mechanisms of the Kyoto Protocol.